But what about those columns? 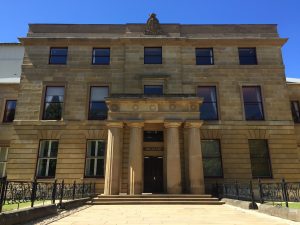 Governor John Franklin and his indomitable wife Lady Jane Franklin were convinced that well-proportioned classical architecture had a civilizing influence on people and society. Their time in Hobart (1837 – 1843) saw the construction of two significant structures reflecting this ideal. The first was the portico at the front of the Treasury Office at 21 Murray Street, Hobart. The second was Lady Jane’s small Greek temple building she named Ancanthe. Lady Jane wrote to her sister in England asking for plans so she could have a small temple built to hold paintings and casts of the Elgin and Vatican marbles. The working plans have been attributed to ex-convict James Blackburn, who worked as a designer and draftsman during and after his sentence.

Many casual observers in Hobart Town at that time decided that the Doric columns on both porticos are the same. Governor John Franklin commissioned ex-convict James Blackburn to design a portico of classical proportions for the new Treasury Building. Blackburn, deciding he would replicate the fluted Doric columns of the Parthenon, produced eight columns, and set them in place in the forecourt of 21 Murray Street in January 1842.  Great outcry ensued in the press, partly over the cost of eight massive Doric columns for the entrance of a government building, but mostly over the ungainly dimensions of the columns that were considered to not be in harmony with the surrounding structures. It was dubbed the Obnoxious Portico and due to pressure from the press, four of the eight columns were removed – and this is where the Lady Jane connection occurs.

Construction for Lady Jane’s Greecian temple was underway at the same time as the Treasury portico. She purchased land specially for it at Lenah Valley, and it was largely completed early in 1843, with four beautiful fluted Doric columns at the entrance. The obvious connection was made: that Lady Jane acquired the four spare columns for her temple.

I have been doing a lot of research in order to get to the bottom of this and – it can’t be proved. Historian Alison Alexander, who wrote an excellent biography on Lady Jane Franklin, confirmed that nothing in Lady Jane’s personal papers can confirm or deny whether the columns on Ancanthe were paid for or were otherwise acquired. The only solution then was to measure the columns in Hobart and Lenah Valley to see if there was some correlation.

There is a considerable difference between the dimensions of the two sets of columns. Now, this doesn’t mean that Lady Jane didn’t use the spare Treasury columns, but it can’t be proven that she did.

So how do the columns shape up to Classical proportions?

According to the traditions of the ancient Greeks, they derived their architectural proportions from those of the ideal athlete. This means that a Greek Doric column is stout and has a height to diameter ratio of 6:1. The Doric columns of the Parthenon are: height 10,393 mm and diameter 1,889 mm.

A quick bit of maths shows that neither the columns of Ancanthe nor the Treasury columns fit nicely into the preferred Greek Doric proportions.

James Blackburn hotly defended his portico in letters to the newspaper. He asserted that certain architecture has a morally beneficial effect and that only those who have sound judgement and good taste could appreciate his work. He also complained bitterly that the valueless opinions of the press could have such influence as to cause the removal of half of the planned columns.

While there are many things left unanswered about these columns, one thing is very clear: if either set of columns is a little astray from the ideals of the ancient Greeks, then all can be forgiven as they both enhance the streetscape of each location and help to make Hobart a special place.

Medical care in colonial Hobart – how bad was it?

When we think about conditions experienced by convicts and settlers in the first years of colonial Hobart, it is very easy to fall into the trap of the usual line: everyone had a rotten time, Read more…