Famous Constitution Dock – but which constitution? 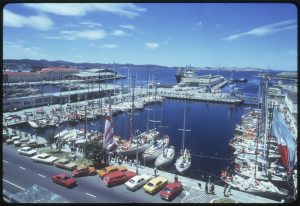 1970 Constitution Dock: Kings Pier Marina has not yet been constructed.

Constitution Dock is famous for its association with the Sydney Hobart Race. It was the final destination from the first race in 1945. The arrival of the maxi yachts in the 1980’s forced the move to Kings Pier Marina – but we still hear the commentators say “the yachts are approaching Constitution Dock.” You may well have wondered – which constitution?

Have a read of this to find out more. As you wander along the docks, welcoming the yachts and crews, you will have a deeper appreciation of this interesting bit of Hobart’s history, going back nearly 170 years.

We know that since the arrival of the first British settlers to Hobart in 1804, the waterfront has always been a busy place. An extraordinary amount of infill has been done to reshape the waterline to better suit the needs of the ships. The port had to accommodate not just convict transports and supply ships, but the many hundreds of whaling vessels during the peak of Tasmania’s whaling years from the early 1830’s to the late 1870’s.

Construction of a new dock was begun in 1847, under the direction of Governor Denison. He began his career in the Royal Engineer Corps and as an officer in the Admiralty he undertook construction of dockyards at Portsmouth, Woolwich and Bermuda. Denison was appointed governor of Van Diemen’s Land and arrived in Hobart in January 1847. By the end of the year construction on the new dock had begun. Convicts labourers were used to excavate rubble and soil from nearby banks and quarries to create walls out into the water. 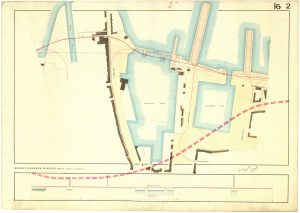 1883 Railways on the waterfront. Note the heavy red dotted line: that is the original waterfront.

The work was completed in 1850 and Governor Denison opened the dock on 3rd December, the public holiday for the Hobart Anniversary Regatta (see the story about the Regatta  which I published on 14 December 2018). This was a tragic day for Hobart and all involved in the Regatta. Eight crew were on board the British Queen which capsized during one of the last races of the day. Only one man survived. An inquest revealed that the British Queen was in the lead when she made a tight tack around a buoy-boat and capsized, going down stern first. None of the following yachts stopped to pick up the struggling men. Only one man survived, and that was by floating on his back. He was eventually recovered a mile from the buoy-boat, heading down  the Derwent on a fast sea-going tide.

Govern Denison named Constitution Dock after the new Australian Constitutions Act 1850. This Act was vitally important for the colony as it established an elected Parliament in Van Diemen’s Land. The important detail is in Section 32 of that Act. It allows the Legislative Council to create a Constitution which required Royal Assent by Queen Victoria, rather than being signed off by the Governor. 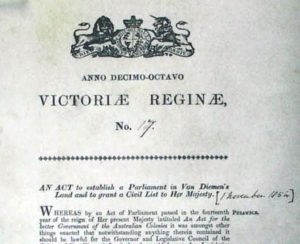 In order to put the powers of this new constitution in effect and become a self-governing colony,  Van Diemen’s Land had to end convict transportation. This was a long, drawn out process, with the many voices in favour of the end of transportation drowning those who wanted it to continue. The last convict ships arrived in Hobart in 1853: the Duchess of Northumberland in April with 216 female convicts, and the St Vincent in May with 207 male convicts.

Now the Act could come into effect and the Parliament of Van Diemen’s Land was created. This was to be the supreme lawmaking institution in the Colony. The Upper House, the Legislative Council, had 15 members and the Lower House 30 members. The members of both houses were men who were elected by male voters who had to be property owners or who had attained certain educational qualifications.

Things didn’t move quickly in colonial politics. The constitution as finally completed and was known as the Constitution Act 1854. It received Royal Assent in 1855, nearly 6 years after Constitution Dock was opened. 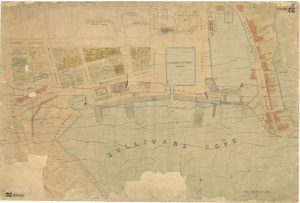 About 1870 – map of Hobart waterfront