How to read a building: Architectural Eras and Styles in Hobart – part 2

This continues from the previous article: architectural eras and styles in Hobart – part 1.

Era: Federation 1890 – 1915
Style: Eclecticism: Decorative motifs, bits of other styles. The idea with this style is to produce in one building a new and original structure by selecting elements from other styles. The aim was not to imitate other styles but to create something entirely new.
Used for: commercial and domestic buildings.

The National Mutual Life building is an excellent example of Federation era, Eclectic style architecture in Hobart. It includes a corner tower and elements of Classical and Gothic styles. It is sandstone on a granite base. The entry is flanked by granite Corinthian topped columns.

The top floor has a stone colonnade with Corinthian style columns and a Gothic detailed parapet. The panther detail in the middle section is a reference to Christian mythology, taken up from the ancient Greek and Roman stories, that the panther gets on with everyone except the devil.

On this site originally stood the Waterloo Inn, built in the early 1830s and demolished in 1909 to make way for the current structure. It opened in 1910 as a boarding house called Waterloo House. Up until 1970 Waterloo House was used for accommodation and commercial purposes, after which it was fully occupied by the law firm Butler McIntyre and Butler, which also occupies the red brick building next door at 22 Murray Street.

This building comprises many of the key elements of Federation Edwardian architecture: hipped iron roof, eaves with brackets and iron work on the verandahs. The iron work was locally made. The windows and quoins are detailed with white stucco. The wing facing onto Murray Street is particularly impressive, with elaborate detailing. The stained-glass Diocletian window alongside the entry steps is part of the original 1910 construction.

The Hobart GPO occupies a prominent position in the CBD. It has many distinctive architectural features. It is constructed of smooth sandstone with pronounced string courses. Between the windows and doorways the stone work has heavy rustication. Under each of the pediments are Ionic half columns. All the windows are round-headed with a range of decorative features.

Now part of the Treasury complex, this was constructed in 1914 as the new entrance to the Supreme Court of Tasmania. The Mannerist architects took the rules established by High Renaissance architecture to create elaborate and distinctive extremes in order to draw attention to their buildings.

In this case, the lower part of the façade is made more massive with square blocks on the columns, known as rustication. On the roof line is a broken pediment and the whole structure has an exaggerated, ponderous, gigantic appearance.

This current building is a result of the combining of four adjacent buildings in the 1930s, after which it was given this Art Deco façade. It has a stepped pediment on the roof line, windows in sets of three and the whole has a strong vertical, streamlined appearance.

Dating from 1920, the façade is all that remains of the original building, constructed for the Hydro-Electric department, and later used by the Health department. The façade was originally designed for construction around the corner in Davey Street to mirror portions of the Public Works building next to the former St Mary’s hospital. It has a Gothic-style pointed street front arch. The Gothic lines of the windows give a taller appearance. Gothic checker-board decoration above the deeply recessed front entry is an interesting feature.

This in the process of becoming part of the new luxury style Marriott hotel, The Tasman, due to open in September 2020.

The CML Building is an exceptional version of Stripped Classical style as it has touches of Art Deco elements topped with English Picturesque elements in the multi coloured terracotta roof tiles.

It has a symmetrical façade divided into vertical bays. The tall narrow windows also reflect the classical style as does its Spartan appearance through plain wall surfaces. The classical ornamentation of columns, typical of an institutional building, have been stripped away to leave the bare bones of classical proportion.

Constructed in 1977 the RBA (Reserve Bank of Australia) building is an excellent example of the reasons why Brutalist style was created – it was quick and cheap to erect. In the long years of Tasmania’s economic slumps this style of public building was seen as being fiscally responsible.

It has recurring modular elements to form a massive structure that doesn’t disguise its purpose. This is obviously a commercial building and doesn’t try to disguise itself as something other.

This is a typically Brutalist style, being enhanced with a large scale, free-standing sculpture in the front corner. The bronzes are life sized works of the Antarctic by Tasmanian artist Stephen Walker.

The term Brutalist comes from a French word to indicate raw or raw materials. 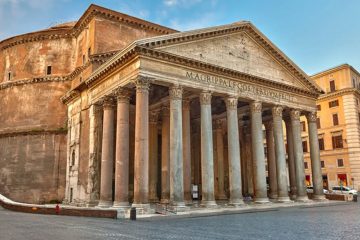 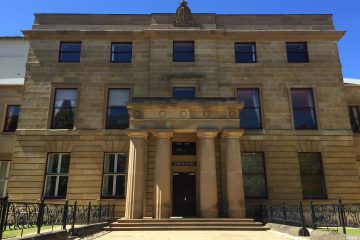 How to read a building: Architectural Eras and Styles in Hobart – part 1 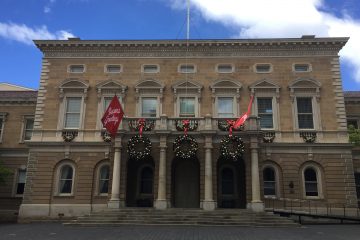 How to read a building

As part of the Open House Hobart weekend in November each year, I lead a walking tour of the Hobart CBD, called What Style is it? On this walk we explore and discover Hobart’s fabulous Read more…