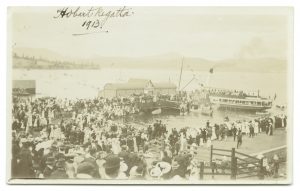 As we have just passed the 180th Anniversary of the Hobart Regatta, it’s a good time to find out some of the more interesting details of what has become a part of our Tasmanian tradition. The Hobart Regatta was Tasmania’s most important public event for more than a century.

December 1st, 1838 was fixed on by Governor Sir John Franklin for the first Regatta, as it was considered to be the anniversary of the “discovery” of this island by Abel Tasman. More contemporary research has established that December 3rd, 1838 was the date that Tasman claimed formal possession of Van Diemen’s Land for the Dutch.

Franklin and his wife Lady Jane established the Hobart Regatta in the hope that on at least one day in the year the people of Hobart Town would be brought together “in harmony by a common love of sailing and of their beautiful harbor”. Newspaper reports told of huge crowds, upwards of 12,000 people, pouring to the regatta grounds near the Queen’s Domain, and along Macquarie Point and the New Wharf, which is now called Salamanca Place.

At the entrance to the regatta grounds, spectators were greeted by boards pasted with patriotic and poetic contributions to the day. Here is an example:

On the first of December,
I’ll eat till I throttle,
For the love of Tasmania,
blue ribbons and wattle.

Many brewers also contributed to the festivities, with free beer being handed out from booths, as well as cheese and bread. Lady Franklin also supplied refreshments in the Governor’s Pavilion for her particular friends. At this first regatta everything was conducted in a very social and relatively sober manner. A good time was had by all, but it wasn’t just about the free booze and bread. The races of the water craft ranged from tiny single-handed dinghies, large yachts and of the greatest interest was a race between 16 whale boats, the crews of which rowed a course of seven miles in 45 minutes.

Hobartians certainly enjoyed themselves each year at the regatta holiday, so much so that by 1842 Lady Jane Franklin was disgusted with the whole event, which she said had become “festivity of licentiousness and immense disorder”. The governor called for the organizing committee of the 1843 regatta to follow far more stringent rules regarding free beer, but the committee refused to comply and the regatta went ahead without the Governor’s patronage – and the beer once again flowed freely. Comments in the press suggested that the unruly behaviour of the commoners was only made worse by the police, whose action, it was claimed, lead directly to riot and disturbance.

The regatta grounds were moved from the government domain to Sandy Bay. Despite the absence of the Vice-Regal patronage on the day, a ball held by Lady Jane at government house was a great success. She called it a ball in commemoration of Tasman’s discovery, the press insisted on called it the Regatta Ball. It was a well-attended – and rather sober – affair.

Recalled to England, the Franklins departed Hobart on November 3rd, 1843 – just a month before the next regatta which the new governor, Sir John Eardley Wilmot, attended.

By 1855 the regatta was once again denied Vice-Regal patronage because Governor Fox-Young complained to the organizing committee that as he was planting trees and shrubs on the government domain, he was no longer going to tolerate the broken bottles and other rubbish that accumulated there during the regatta. In retaliation the committee did not invite the governor to be patron that year. Subsequent regattas have all enjoyed the patronage of the governor. 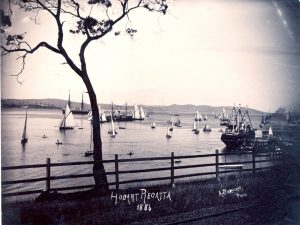 Sir John and Lady Jane Franklin established the regatta to create a public event where all levels of society could mingle and enjoy a holiday, where the lowest could mix freely with the highest. It soon came to be seen as an inalienable right of Hobartians, and an expression of their democratic freedom. Little about the regatta has changed over its 180 years – it still has an extensive array of aquatic events, sideshows and of course the People’s Day. http://www.royalhobartregatta.com/Timetable.html

The regatta has had just two significant changes since 1838: a slight name change and the date. The event is now known as the Royal Hobart Regatta and is held on the second weekend in February.