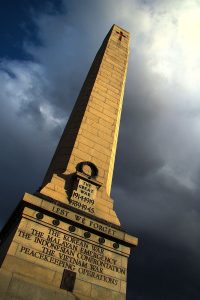 Cenotaph on the Queen’s Domain, Hobart

If you were at the dawn commemoration of ANZAC day in Hobart yesterday, you may have wondered why the monument has the date for WW1 as 1914 – 1919, when so many others use the end date as 1918. This monument was constructed in 1925 to commemorate Tasmanians who served in WW1.

Inscriptions with the dates of 1914-1919 rather than 1914-1918, were common of monuments of that time, influenced by the date of the Treaty of Versailles (28 June 1919) and the period of active service rather than the actual cessation of hostilities in November 1918.

The cenotaph was designed by local architects Robert Hutchison and Bernard Ridley Walker whose design won first prize in a competition in 1923. The base, or plinth, is made of bluestone (AKA dolerite, the stuff Mt Wellington is made of) and the obelisk is made of unpolished granite.